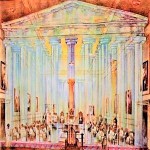 WHAT IS MASONIC RITUAL?

This is the first installment in a series exploring the effects of Masonic ritual. Here I explores the nature of ritual, particularly in relation to Freemasonry. This was previously published on the Universal Freemasonry blog site.

A modern Masonic guide states that ritual is “a practice done in a set and precise manner so as to produce a result with a symbolic signification… It can be viewed as a formula that creates a hidden code to be discovered by those who are in search for the truth.” Masonic ritual, in its general form, has been used for hundreds of years to create an “idealized reality of a perfected Man” in each of the members of the Lodge. 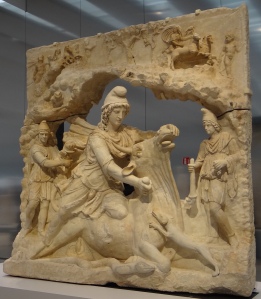 Bro. Wilmshurst, in The Meaning of Masonry, states:

Masonry is a sacramental system, possessing, like all sacraments, an outward and visible side consisting of its ceremonial, its doctrine, and its symbols which we can see and hear, and an inward, intellectual and spiritual side, which is concealed behind… and which is available only to the Mason who has learned to use his spiritual imagination and who can appreciate the reality that lies behind the veil of outward symbol.

In other words, there are two sides to Masonic ritual: the outward and the inward; these are likened to the great Mystery Schools of ancient Babylon and Greece, where there existed and were performed Lesser and Greater Mystery ceremonies. In general, the legends contained in Freemasonry parallel those from the ancient Mystery schools; and, Freemasonry by its own attestation across the ages teaches a system of morality.

Wilmshurst notes, again from The Meaning of Masonry, that “…it is perfectly certain that Pythagoras was not a Mason at all in our present sense of the word; but it is also perfectly certain that Pythagoras was a very highly advanced master in the knowledge of the secret schools of the Mysteries, of whose doctrine small portion is enshrined for us in our Masonic system.” Additionally, from the Dionysian Artificers, by Hippolyto Da Costa:

“It appears, that, at a very early period, some contemplative men were desirous of deducting from the observation of nature, moral rules for the conduct of mankind. Astronomy was the science selected for this purpose; architecture was afterwards called in aid of this system; and its followers formed a society or sect, which will be the object of this enquiry. The continuity of this system will be found sometimes broken, a natural effect of conflicting theories, of the alteration of manners, and of change of circumstances, but it will make its appearances at different periods, and the same truth will be seen constantly.

The importance of calculating with precision the seasons of the year, to regulate agricultural pursuits, navigation, and other necessary avocations in life, must have made the science of astronomy an object of great care, in the government of all civilized nations; and the prediction of eclipses, and other phenomena, must have obtained for the learned in this science, such respect and veneration from the ignorant multitude, as to render it extremely useful to legislators, in framing laws for regulating the moral conduct of their people.

The laws of nature and the moral rules deducted from them were explained in allegorical histories, which we call fables, and those allegorical histories were impressed in the memory by symbolical ceremonies denominated mysteries, and which, though afterwards misunderstood and misapplied, contain systems of the most profound, the most sublime, and the most useful theory of philosophy. Amongst those mysteries are peculiarly remarkable the Eleusinian. Dionysius, Bacchus, Osiris, Adonis, Thammuz, Apollo, & c., were names adopted in various languages, and in several countries, to designate the Divinity, who was the object of those ceremonies, and it is generally admitted that the sun was meant by these several denominations.”

Thus, we have a ceremonial system designed over the course of thousands of years using legend, myth, and symbol in ritual form to teach human beings what we may do to perfect ourselves. The focus of such a ritual is to stimulate the mind and nature of the human being so as to be open to new lessons, new ways of thinking, and to observe and understand our place in Nature’s overall scheme.

In order to have the ritual perform its “magic,” the physical, emotional, and mental formation of the sacrament must not only be as ‘good as we can make it,’ but also involves positive intention and perfect cooperation by each participant. When Freemasons achieve synchronization in these three areas, the ritual will provide the most constructive outcome possible. The partaker of the ritual does not know what awaits her, but the presenters do; thus, the onus of a well-done ritual lies mainly on those that are performing it.

The idea that ritual can have an effect on the ‘subtle’ bodies of both humans and environment is not new; theosophists of the 19th c C.E. brought the idea of ritual use creating subtle energies from the Eastern Religions, specifically Hinduism and Buddhism, and these theories have been refined further by modern Yogis and spiritual teachers. In addition, many modern scientists, including Michio Kaku and Albert Einstein, postulate the power of the human mind may do many things that are currently unknown, including what we think of as “extra-sensory.” Human beings are part of Nature and as such, are subject to the Laws of Nature, both known and not-yet known. As Einstein stated:

“A human being is a part of the whole, called by us “Universe,” a part limited in time and space. He experiences himself, his thoughts and feelings as something separate from the rest—a kind of optical delusion of his consciousness. The striving to free oneself from this delusion is the one issue of true religion. Not to nourish it but to try to overcome it is the way to reach the attainable measure of peace of mind.”

How does the Masonic ritual go about creating the induction of the reality of perfection? Subtle energy focused in the Masonic “structure” is the key; these energies are the vitality that humans generate through physical, mental, and emotional actions, which is transferred to the tools, organic and inorganic, that are present within the ritual sphere.

These spheres of energy, akin to bubbles, hold the energy created by the ritual intact until the time for its eventual release. When the energy is released, if it were optimally produced, it would have a profound effect on all that it touches. Whatever the intention of the ritual, the releasing effect would be as a large bell being struck, a perfectly clear note vibrating like the waves of a pebble dropped into a still pond.